The United States and Iceland: LGBTI Rights as a Common Value

Message from the U.S. Embassy’s Chargé d’Affaires Jill Esposito to the People of Iceland and visitors to Reykjavik Pride 2018 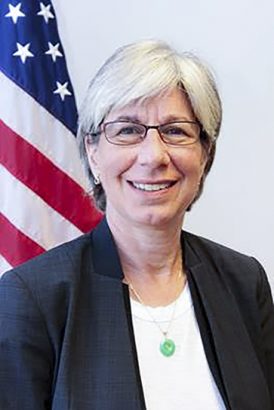 I am delighted to extend my greetings to all the participants in Reykjavik Pride. The U.S. Embassy is a proud supporter of this festival and of the LGBTI community.

This year, the U.S. Embassy will march in the Reykjavik Pride Parade for the eighth consecutive year with our families and friends. Our presence is a demonstration that Americans and Icelanders share many values, including the belief that all persons should live with dignity.

I recall the joy that filled downtown Reykjavik on that sunny August day as we marched in last year’s Pride Parade. I appreciated all the words of support that Icelanders gave our Embassy team along the way. We look forward to again taking part in the celebration.

We will be marching because LGBTI rights are part of the State Department’s human rights mission. The United States and Iceland are among the 40 member states of the Equal Rights Coalition, the first-ever intergovernmental organization dedicated to the protection of LGBTI persons worldwide.

“the United States stands with people around the world in affirming the dignity and equality of all people regardless of sexual orientation, gender identity or expression, or sex characteristics. Human rights are universal, and LGBTI people are entitled to the same respect, freedoms, and protections as everyone else.”

In his message, Secretary Pompeo reaffirmed that the United States will use diplomacy to oppose criminalization and violence directed against LGBTI persons. The United States will raise human rights concerns, provide emergency assistance and impose sanctions against the persecutors, he said.

After all, as Secretary Pompeo noted: “Our nation was founded on the bedrock principle that we are all created equal – and that every person is entitled to life, liberty and the pursuit of happiness.”

Here in Iceland, the U.S. Embassy recognizes that the fight for LGBTI rights should incorporate all the friends and allies it can muster. As part of our sponsorship, we will once again support the Family Festival of Reykjavik Pride to provide a safe and welcoming environment for LGBTI families. We also will provide funding for a ramp and other features to make Pride fully accessible to disabled participants. The call to action for LGBTI rights becomes even more powerful when all of our voices are united.

Finally, I wish to congratulate Samtokin ’78 on its 40th anniversary as the umbrella organization for LGBTI rights in Iceland, including the Pride Festival. Despite obstacles and struggles, this milestone is a testament to your staying power and commitment to this cause. We have been proud to partner with Samtokin ’78 over the years and we look forward to more collaborations.